DDoS attacks continue to grow in intensity, breadth and complexity as new threat vectors expand the options available to malicious attackers. Established solutions, which rely on ineffective, signature-based intrusion prevention or traffic rate-limiting, are no longer adequate. Moreover, the completely independent trend of enterprise workloads migrating to the cloud is also on the rise, exposing businesses to a wider attack surface. These two trends have amplified the need for advanced DDoS protection solutions to protect cloud workloads.

Cloud providers currently offer DDoS mitigation services directly to their tenants. However, while many tenants benefit from such services, others find they require additional DDoS protection options, particularly when they are targeted directly by complex attacks.

The reason for this is three-fold:

Microsoft Azure is closing this gap by providing customers with the option of adding inline DDoS protection through network virtual appliances (NVAs) available in the Azure marketplace. This is made possible by using Azure’s Gateway Load Balancer (LB) feature. The Gateway LB ensures that relevant NVAs are injected into the ingress path of the internet traffic as it heads towards Azure-hosted applications and services. 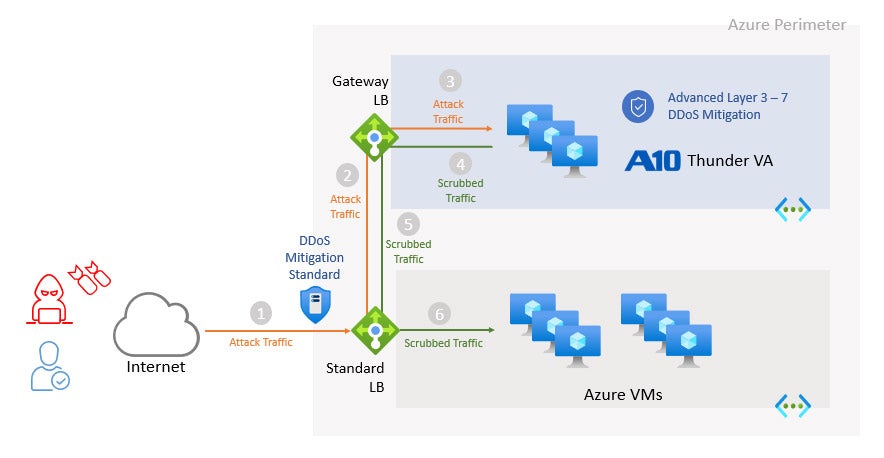 A10’s Thunder TPS scales to defend against the DDoS of Things and traditional zombie botnets. This Azure marketplace solution is focused on high-resolution, packet-based DDoS detection via inline deployment in front of your protected Azure Virtual Networks. This deployment also achieves the fastest time-to-mitigation against Layer 3 to 7 attacks with minimal latency.

Capabilities of the A10 Thunder TPS include:

We understand that DDoS attacks can be challenging to mitigate. The A10 support team provides 24x7x365 services, which includes the A10 DDoS Security Incident Response Team (DSIRT), to help you understand and mitigate the most advanced DDoS attacks.

To learn more about the solution, please visit:

Tarun Aggrawal is Lead Security Solutions Architect for A10 Networks in North America. Tarun has been at A10 Networks for 8 years, where he has worked extensively on global Service Provider solutions for A10’s customers, with particular focus on DDoS mitigation and Carrier-Grade NAT solutions. Tarun has often been engaged in speaking events and webinars for A10 on his topics of expertise. Read More