What is IPv6 Migration and Why is it Necessary?

IPv6 Migration Has Become Necessary Due to IPv4 Exhaustion

IPv6 migration, the transition to a successor standard to IPv4, is an unavoidable response to IPv4 exhaustion. At the time of the internet’s creation, the IPv4 standard was introduced to allow a unique public IP address to be assigned to each internet-connected computer. Encompassing nearly 4.3 billion different values, IPv4 seemed to be an ample supply at the time, but by the late 1980s, it became apparent that this pool would be depleted sooner rather than later. With IPv4 exhaustion becoming a real and present problem for carriers and subscribers, the industry turned its focus to a long-term solution.

IPv6, a successor to IPv4, was published by the IETF (Internet Engineering Task Force) as a draft standard in December 1998, went live in June 2012, and was ratified as an internet standard in July 2017. Lengthening the IP address from 32 bits to 128 bits, IPv6 alleviates the IPv4 exhaustion crisis for the conceivable future. Other IPv6 enhancements include improvements in efficiency, performance, and security.

Since its adoption, IPv6 migration has been widespread but uneven. Major web content providers such as Google, Alexa, Facebook, Yahoo, YouTube, and others have achieved full IPv6 migration, while most mobile operators, ISPs, and mobile device manufacturers support both standards concurrently. At the same time, the high cost of changing existing network infrastructure has slowed enterprise IPv6 deployment. Due to the large number of websites, devices, and networks that remain primarily IPv4, most service providers, enterprises, and other organizations need to support connectivity for both IPv4 and IPv6 even if their own networks have achieved full IPv6 migration. 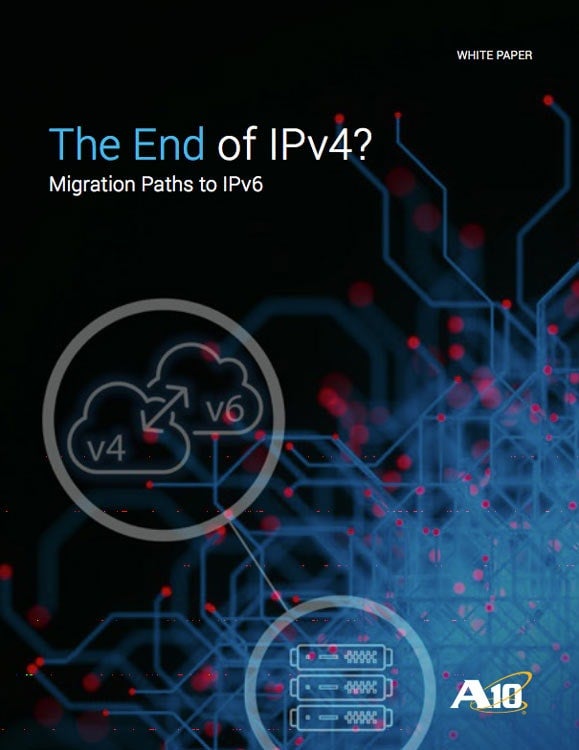 The current hybrid environment encompassing both IPv4 and IPv6, as well as the necessarily staged nature of IPv6 migration, has led to the introduction of technologies to ease the transition and extend the life of existing IPv4 investments. Network address translation (NAT) and carrier-grade NAT (CGNAT) solutions enable a single IPv4 address to be shared across multiple connected devices or sites, thus enabling organizations to leverage their existing investment in IPv4 and to avoid purchasing additional and costly IPv4 addresses on the open market. Transition technologies enable translation between IPv4 and IPv6 addresses or tunneling to allow traffic to pass through the incompatible network, allowing the two standards to coexist. These include NAT64, DNS64, MAP-T, MAP-E, DS-Lite, LW406, 6rd, 464XLAT.

How A10 Networks Supports IPv6 Migration