Multi-access edge compute (MEC) is emerging as a critical driver for growth in the 5G era. There is an apprehension that telcos partnering with hyperscale clouds like Amazon, Google, Microsoft, and Facebook might end up being relegated to dumb-pipe providers. These fears are overblown. Here’s why.

The Need for Edge Computing

The main drivers for edge computing are the need to reduce the volume of data traversing the network, as well as lowering latency.

The billions of IoT devices now coming online are driving a multi-fold increase in the amount of data generated. This data needs to be processed, inferences made, and a summary saved and acted upon, while the rest is discarded. There is no point in transporting all the raw data to the central cloud prior to these tasks. It is much faster and more efficient to do the processing at the edge, and to use trained machine learning algorithms to act upon the results.

Similarly, lower latency is a key enabler for exotic use cases like self-driving cars, remote driving, and drones. A self-driving car traveling at 65 mph covers almost 100 feet per second. To be safe, such vehicles will require decision support systems with a split-second response time. Both low latency and high data rates will be essential for high-quality decisions.

Taking a broader view, new and evolving use cases call for a new type of network. The networks of today are built primarily for humans, and they’re good enough for the way most of us have been using the internet. However, as more sophisticated and demanding use cases continue emerge, the networks of tomorrow will need to go beyond typical current human use cases like serving a movie or browsing the internet. More importantly, they’ll need to serve both humans and machines—specifically, IoT devices. While humans can tolerate latency in seconds, and have relatively small data needs, machines can produce vastly more data, and their latency requirements are much higher as well. Server-side processing will be critical for some of the new use cases, as will extracting value from raw data in real time. This is why the networks of tomorrow will need to be built differently than our existing networks—and that’s the work now underway with 5G and MEC.

What MEC Can Mean for Telcos

In the short term, MEC can influence 5G adoption, resulting in higher average revenue per user (ARPU). In the mid-term, MEC will enable new revenue streams. In the long term, telcos can differentiate themselves through MEC offerings.

The shift of processing to the network edge can enable transformative improvements in performance and latency, and can unlock new revenue streams from enterprise analytics applications, connected cars and smart cities, to remote surgery and autonomous farming. But telcos can’t operationalize these innovations on their own. Key MEC/5G use cases will depend on extensive, highly scalable platforms—both hardware and software—as well as deep expertise in artificial intelligence, machine learning, and other enabling technologies like orchestration and multi-cloud management. Even the largest telcos lack these capabilities and trying to develop them in-house would represent a major diversion and distraction from their core business. To proceed with MEC/5G, telcos will need to partner with cloud service providers, including smaller players, as well as hyperscale providers. 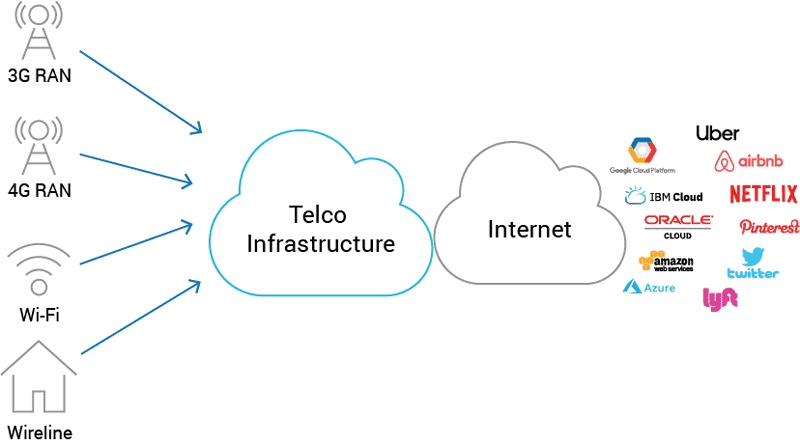 There is a huge potential benefit in partnering with hyperscale providers. Simply put, such partnerships will give 5G a reason to exist. After all, most existing telecommunications use cases are served perfectly well with existing networks. MEC offers the best opportunity for telcos to target early 5G adopters and charge a premium for their connectivity, and in so doing, drive growth, deepen customer relationships, and ensure their central role in the next generation of computing.

Telcos are justified in being apprehensive about partnering with hyperscale providers; if they’re not careful, they’ll end up once again providing the pipes to deliver someone else’s innovation and enable someone else’s profit. But as we’ll show, telcos bring important ingredients to the party, and these ingredients cannot be easily commoditized.

What MEC Means for Hyperscale Providers

Hyperscale providers understand this transformation and are investing to retain their differentiation and relevance. While some emerging MEC strategies are targeting enterprise IT applications with a portion deployed at the edge, others are creating ecosystems for application developers. These ecosystems will provide not only development tools, which can be based in centralized locations, but also edge zones in which to run these applications. The goal is simple: to provide an end-to-end environment for developers and become a one-stop shop.

The importance of partnership is not lost on hyperscale providers who need access to “premium customers” who have purchased low-latency connectivity, and who will be served from edge locations controlled by the telcos.

Converting the Opportunity to a Win-win-win for Telcos, CSPs, and Consumers

The current internet can be seen as connecting users to applications via high-speed pipes. The key point is that data resides in data centers, and access matters more than mode of connectivity. In other words, connectivity is commoditized. It does not matter who provides the connectivity to the data, or what technology is used for this connectivity, e.g. cable, DSL, fiber, or 4G/LTE. Thus, value is captured primarily by application developers.

However, the need for low latency, and by extension MEC, has changed these dynamics. In serving low-latency use cases, the mode of connectivity is extremely important, e.g. 5G with the promise of ultra-reliable low-latency communications (URLLC). Similarly, it now matters who provides the connectivity, as only some telcos will have edge locations capable of delivering low latency and optimized for specific use cases.

Telcos can also provide additional services in these edge locations, such as security, and can generate additional revenue streams.

Partnership between telcos and hyperscale providers is imperative for emerging 5G use cases to take off. Telcos can bring differentiated connectivity options, locations, and users, while hyperscale providers can bring enabling technologies and scale. Both are bringing value to the partnership, and the risk of one being commoditized by the other is significantly decreased.

Neither telcos nor hyperscale providers can realize the full value of the MEC/5G opportunity on their own. By working together and maturing their partnerships, both types of companies can deliver on the promise of these new technologies for everyone’s benefit.

Yasir Liaqatullah is vice president of product management at A10 Networks. He is responsible for driving the technology strategy and roadmap for the company’s portfolio of 5G service provider and enterprise security solutions. READ MORE

What Are You Doing to Inspect Encrypted Traffic? [Video]

The Not-so-Hidden DDoS Arsenal Knocking at Your Network Door

Why SSL Inspection is a Must

Importance of Gi-LAN functions consolidation in the 5G world