More than 200,000 computers in more than 150 countries were crippled by a massive ransomware attack, dubbed WannaCry, and security experts warned that it may get worse before it gets better.

WannaCry is ransomware that exploits a Windows vulnerability and encrypts a victim’s files and holds them hostage, demanding the victim pay a ransom for the files to be decrypted. The attackers are asking for $300 in bitcoins, an amount that doubles if the victim doesn’t pay within three days. 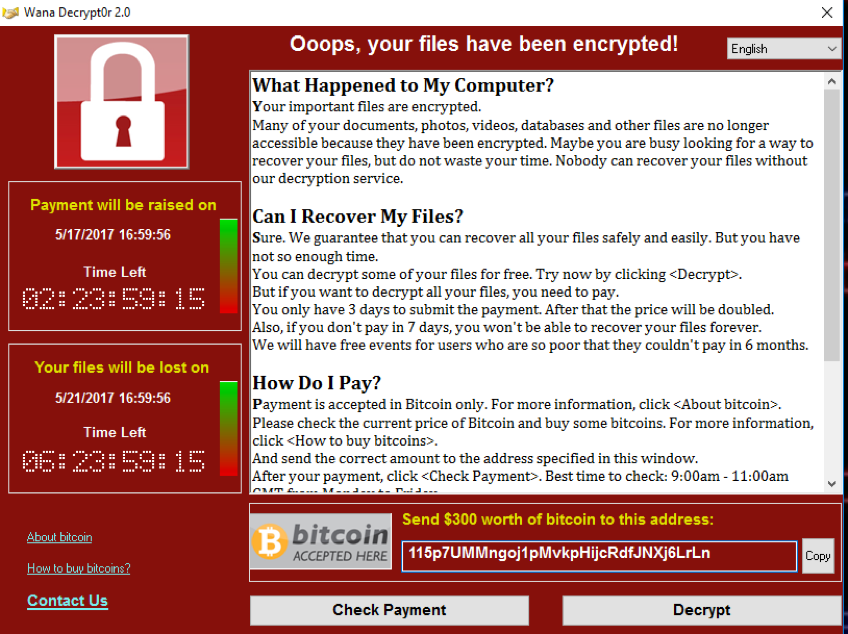 Reports surfaced Monday, however, that the creators of WannaCry are now being targeted by a DDoS attack and are unable to decrypt victims’ files, even after they’ve paid.

TL; DR: DO NOT PAY THE RANSOM. YOUR FILES ARE GONE. the operators behind #WannaCry are being DDoSed with key requests & cant keep up. https://twitter.com/hackerfantastic/status/863833239475171329

The devastation began Friday, when an estimated 57,000 computers were infected. But the fast-moving and apparently random malware continued to spread throughout the weekend, nearly quadrupling the number of infected systems, impacting all verticals including schools, hospitals, public services, auto makers and more.

“It is not clear how the infection started. There are some reports of e-mails that include the malware as attachment seeding infected networks. But at this point, no actual samples have been made public. It is possible that the worm entered a corporate network via vulnerable hosts that had port 445 exposed to the internet. The WannaCry malware itself does have no e-mail component,” according to the SANS Technology Institute Internet Storm Center.

According to a SANS Institute presentation, the exploit is known under the name “ETERNALBLUE,” and was released in April as part of a leak of NSA tools. The ransomware was successful because it used vulnerabilities within small- and mid-sized businesses (SMB) to spread inside networks. The vulnerability was patched by Microsoft in March for supported Windows versions, the presentation notes.

WannaCry works by encrypting most or all of a victim’s files.

“The malware includes an encryption package that automatically downloads itself to infected computers, locking up nearly all of the machine’s files and demanding payment of $300 to $600 for a key to unlock them,” NBC News reported. “All it takes is for one computer on a network to be infected for all of the computers on that network to be compromised.”

While WannaCry’s encryption is “virtually unbreakable,” according to Tom’s Guide, it highlights the importance of knowing what’s happening in your network and examining encrypted traffic to ensure it does not contain threats.

How do you protect yourself, your business and your machines from malware like WannaCry? Here are some best practices to ensure you’re protected against these types of attacks:

Following these best practices increases your chances of preventing WannaCry from infiltrating your network and your business.

How to Identify and Block an Application Attacker

The Benefits of a Full Proxy SSLi Architecture