Testing DDoS Defense Effectiveness at 300 Gbps Scale and Beyond

To help companies understand the options available, A10 Networks and Ixia Communications ran a battery of tests to determine the effectiveness at scale of the A10 Networks Thunder® Threat Protection System (TPS™) 14045, the industry’s highest performance DDoS mitigation appliance.

For this report, we assaulted the A10 Thunder 14045 TPS with a barrage of volumetric, network protocol and application attacks – real-world attack traffic – using the Ixia BreakingPoint security and applications testing platform.

Fifteen challenging DDoS attack vectors where applied at scales of up to 310+ Gbps with 360,000 attacking agents. The summary finding is that Thunder 14045 TPS, powered by A10 Networks Advanced Core Operating System (ACOS®) processing engine, was able to deflect the attack vectors individually and simultaneously without any impact to legitimate user traffic.

“Making investments in new technology is complex because data sheet statistics only tell part of the story. For quantifiable data on how a technology will actually work in their particular network, organizations must test at scale with real-world application traffic and security attacks.”
– Sashi Jeyaretnam | Director of Product Management, Ixia

Denial of service (DoS) is a technique an attacker uses to render an online service inaccessible to legitimate users. DoS attack tools and dark web services come in many shapes and sizes, but all focus on overwhelming the target’s infrastructure. For example, a web server can be overwhelmed with excessive fake requests so legitimate requests cannot be met. Often, these attacks come from compromised computers or the Internet of Things (IoT) botnets, which are remotely controlled by an attacker and used to send the nefarious traffic. These compromised hosts, known as bots and distributed over the Internet, are enlisted in a botnet. This means the attack is launched from many different, distributed hosts simultaneously; which is why DDoS attacks are called distributed denial of service attacks. Attack traffic accumulates to larger and larger traffic rates, all destined for the victim’s IP address.

Technically speaking, the anatomy of DDoS attacks can be divided into several different categories:

The following results summarize the extensive testing conducted by Ixia at A10 Networks’ San Jose, California headquarters in August 2017. The test conducted and the results collected followed Ixia’s DDoS defense validation methodology outlined by Ixia on its methodology paper. The DDoS attacks and legitimate user traffic were created by Ixia’s BreakingPoint security and application testing platform run on the 100 GbE-enabled CloudStorm hardware system. A10 Thunder 14045 TPS was placed in L3 mode inpath to the Ixia platform to separate the untrusted zone, which included attacker traffic and legitimate user traffic aimed toward target servers in the trusted zone. The success criteria of the test were to monitor the trusted zone to understand how legitimate user traffic was affected during an attack and to determine if the DDoS attack traffic was adequately detected and mitigated.

The Equipment Used to Conduct the Test

The test models a large network with an untrusted zone with legitimate users accessing web services and a large number of attacking botnet agents generating DDoS attacks. The trusted zone is the network segment that includes the target servers protected by A10 Thunder TPS. 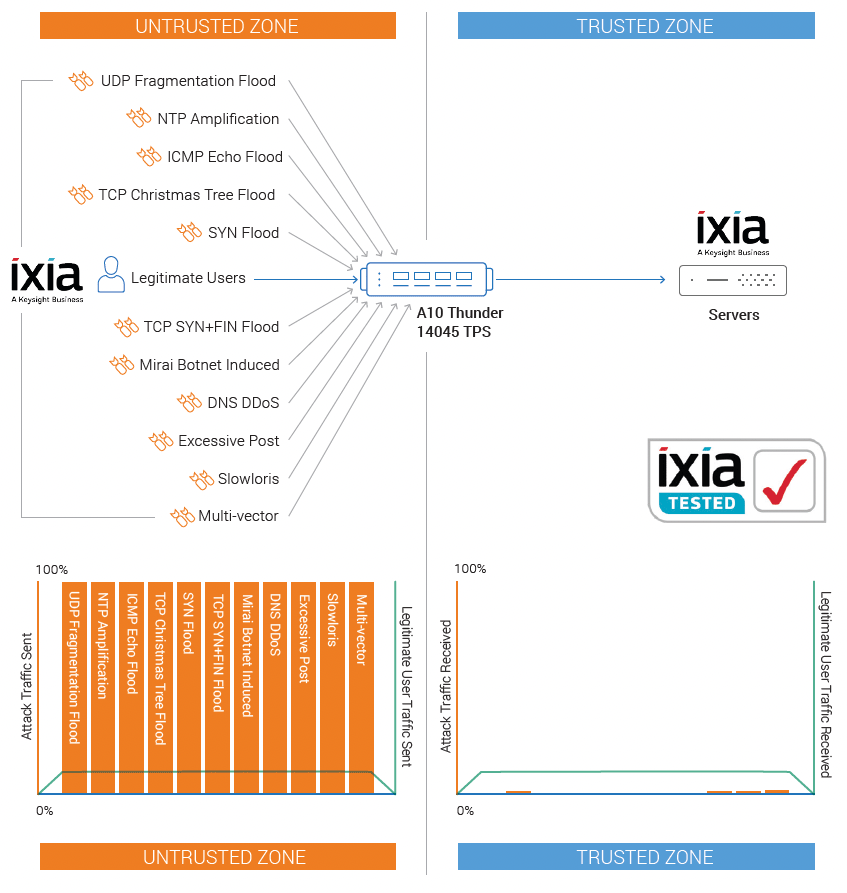 The legitimate user traffic is modeled as users making HTTP GET requests and the server responses to those requests. These transactions followed normal user traffic patterns and were able to meet all TCP and HTTP authentication challenges.

Repeated HTTP GET requests were applied throughout the tests, and 5 Gbps of response traffic was sent back to the legitimate users without interruption during peacetime and while under attack. 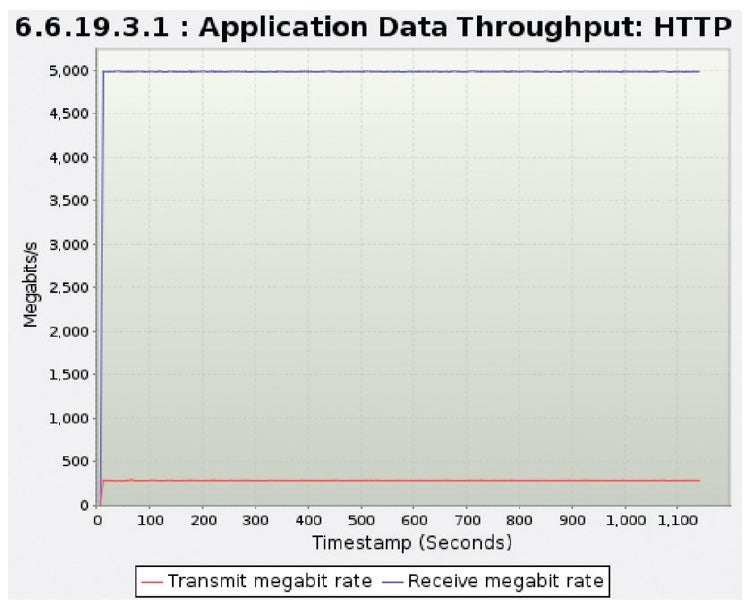 Unaffected legitimate users HTTP GET and responses (from BreakingPoint report)

Security Effectiveness for Each Attack Type

Security Effectiveness for Each Attack Type 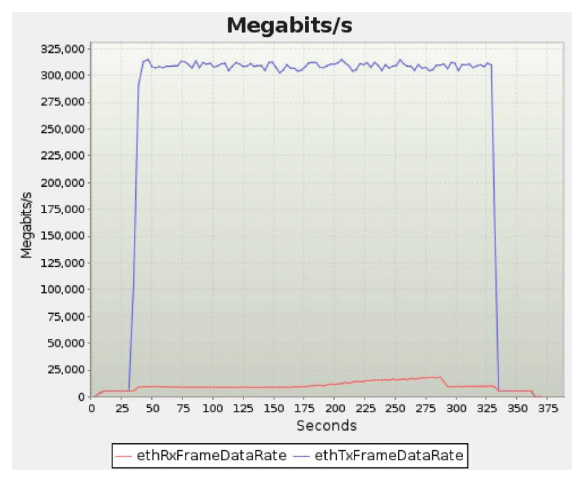 When it comes to DDoS, the focus should always be on the legitimate user and ensuring that critical services are available to them. Although DDoS attacks are, by nature, largely brute force attacks, DDoS defense must be surgical and able to intelligently distinguish legitimate user traffic from attacking bot behavior. Strategies like Remote Triggered Black Hole (RTBH) and service rate limiting should be the last course of action, not the first, to prevent the service from falling over, because these strategies are indiscriminate and in effect help the attacker accomplish their objective of blocking availability of services to legitimate user.

Effective DDoS solutions will include many strategies for detecting and mitigating malicious DDoS behavior, including: 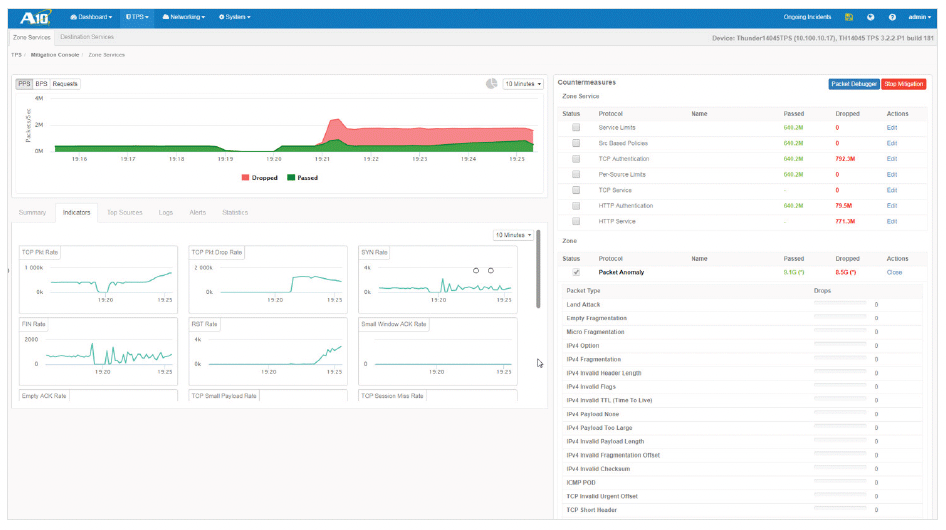 Key Takeaways
A10 Thunder TPS was designed to deliver high performance with surgical precision to increase the effectiveness of DDoS defense. It is available in a range of form factors that make economic sense to busineses of any size. Thunder TPS offers unrivaled scale, enabling you to reduce the number of units your business must purchase, which has a dramatic positive impact on TCO and overall reliability. 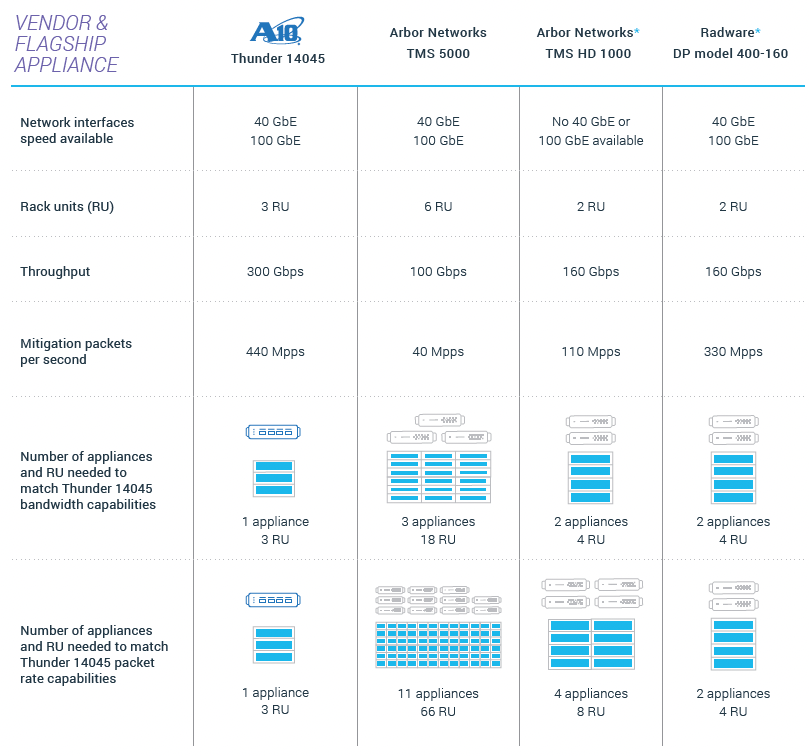 * As advertised on the vendor websites. Highest performance advertised appliance
from the vendor may or may not be in production at the time of this document’s reading.

Older, established vendors can’t keep up with A10 Networks’ innovation and continue to fall behind. The choice is clear. It is your money. Maximize your investment and get the best DDoS defense to protect against multi-vector attacks with precision and uncompromised scale.

New threat vectors have changed the breadth, intensity and complexity of options available to attackers. Established solutions, which rely on ineffective, signature-based IPS or only traffic rate limiting, are no longer adequate. A10 Thunder TPS offers the scalability and precision to defeat the most challenging multi-vector DDoS attacks to make your infrastructure resilient against DDoS attacks. Unlike outdated legacy DDoS protection products, Thunder TPS is built on A10’s market-proven Advanced Core Operating System (ACOS) platform, which delivers scalable form factors and cost structures that make economic sense with a complete detection, mitigation and management solution.

A10 Networks Thunder 14045 TPS, the industry’s highest performance DDoS defense appliance, was put to the test and was able to defeat DDoS attacks with precision and protect legitimate user at a rate of 310+ Gbps.

Now You Know the Facts

Contact A10 and let’s get started on a path to a more effective, scalable and cost effective approach to DDoS resilience.

A10 Networks (NYSE: ATEN) is a Secure Application Services™ company, providing a range of highperformance application networking solutions that help organizations ensure that their data center applications and networks remain highly available, accelerated and secure. Founded in 2004, A10 Networks is based in San Jose, Calif., and serves customers globally with offices worldwide.

Disclaimer
This document does not create any express or implied warranty about A10 Networks or about its products or services, including but not limited to fitness for a particular use and non infringement. A10 Networks has made reasonable efforts to verify that the information contained herein is accurate, but A10 Networks assumes no responsibility for its use. All information is provided “as-is.” The product specifications and features described in this publication are based on the latest information available; however, specifications are subject to change without notice, and certain features may not be available upon initial product release. Contact A10 Networks for current information regarding its products or services. A10 Networks’ products and services are subject to A10 Networks’ standard terms and conditions.