The Evolution of IoT with 5G: Future-proofing Current IoT Investment

In my last few talks on 5G, I frequently got asked that given there are close to a billion cellular IoT devices deployed today and with introduction of 5G, will it replace all the existing IoT technologies and would current investment in IoT become obsolete? The simple answer is no, but to understand this better, let’s dive a little deeper into existing IoT technologies.

Internet of Things (IoT) is growing exponentially with some forecasts estimating total number of IoT devices by 2025 to be north of 25 billion devices. For a layman, IoT devices are small, low-powered devices that generate infrequent low-volume traffic, such as smart meters. While that is generally true, IoT devices cover a much larger segment. One could classify IoT into two categories – wide-area IoT and short-range IoT.

Wide area IoT devices are generally low power and transmit infrequent short bursts of data over a low-power wide area network (LPWAN). These devices are generally installed in remote areas with no external power supply (i.e., they are running on batteries) and therefore are expected to be very power efficient. LPWANs can work in both licensed spectrum as well as unlicensed spectrum. Two of the most common LPWAN technologies that work in unlicensed spectrum are SigFox and long-range wide area network (LoRaWAN). Those that work in licensed spectrum are narrowband (NB) -IoT and LTE-M or LTE machine type communication, also known as Cat-M1, both of which are specified by 3GPP in Release 13 and are collectively known as cellular IoT.

SigFox is a proprietary technology owned by a French company of same name. It is ultra-narrowband technology enabling wireless signals to pass freely through solid objects making it suitable for underground and in-building operations. SigFox operates in 868MHz band in Europe and 902MHz band in U.S. It is designed to support arrays of devices likely to send small amounts of data (100 bytes per second) in short bursts (e.g. parking sensors, utility meters). As of end of 2018, a little more than 60 countries had SigFox-based deployments.

LoRaWAN is a spread-spectrum technology with a wider band than Sigfox. LoRaWAN is actually a medium access control protocol running on top of the Long Range (LoRa) physical layer (PHY) protocol operating in unlicensed bands such as 433 MHz and 868MH in Europe, and 915 MHz in Australia and North America. LoRaWAN technology is licensed by SemTech and has been developed under the LoRaWAN alliance since 2015. As of end of 2018, about 100 countries had LoRaWAN-based IoT deployments.

Before we jump into cellular IoT, let us briefly look at short-range IoT devices. These generally need higher power, but still significantly lower than most smartphones, and exchange higher amounts of data. Because of the higher power requirement, these devices either need to be frequently recharged or need an external power supply source. These devices can be further divided into personal area network (PAN) or local area network (LAN). PAN IoT devices have a range of few feet and the most common technologies connecting these devices are Bluetooth, ZigBee and 6LoWPAN or IPv6 low-powered wireless personal area network.

Cellular IoT technologies, Narrowband IoT (NB-IOT) and LTE-M, are deployed as part of the LTE network today and are expected to work with 5G networks using the non-standalone (NSA) architecture. In 5G NSA, the radio interface will still be LTE-based, while the core network will be 5G SBA. As 5G new radio (NR) technology for IoT in Release 16 and beyond is developed, we will start seeing 5G NR-based IoT devices deployed in standalone (SA) mode with the 5G SBA packet core.

What is the difference between NB-IoT and LTE-M?

Before we go any further, one question that usually comes up is why we need NB-IoT and LTE-M as two different technologies in Release 13. LTE-M supports lower device complexity, massive connection density, low device power consumption, low latency and provides extended coverage, while allowing the reuse of the LTE installed base. NB-IoT is characterized by improved indoor coverage, support of massive number of low throughput devices, low delay sensitivity, ultra-low device cost, low device power consumption and optimized network architecture. This makes them sound awfully similar. However, there are some notable differences:

Figure 1 below shows LTE-M and NB-IoT integration into the existing LTE network. Service Capability Exposure Function (SCEF) is the new entity added into the LTE network in Release 13. To help meet the low power requirements for LTE-M and NB-IoT, the power-hungry protocol to establish IP data bearers has been replaced by extending the non-access stratum (NAS) protocol to allow small amounts of data to be transferred over the control plane. In this case, the IP stack is not necessary, so this type of transfer has been named Non-IP Data Delivery (NIDD) and is shown with the red large dashed line in Figure 1 below.

In Release 13, 3GPP defined SCEF to be the interface for small data transfers and control messaging between enterprises’ IoT application servers and the operator’s core network. SCEF provides APIs to the enterprises for the small data transfers and control messages and uses 3GPP-defined interfaces with the network elements in the operator’s core network to perform its functions. Release 13 also supports IoT IP data delivery with NAS control plane, which is shown in Figure 1 below with green small dashed line. 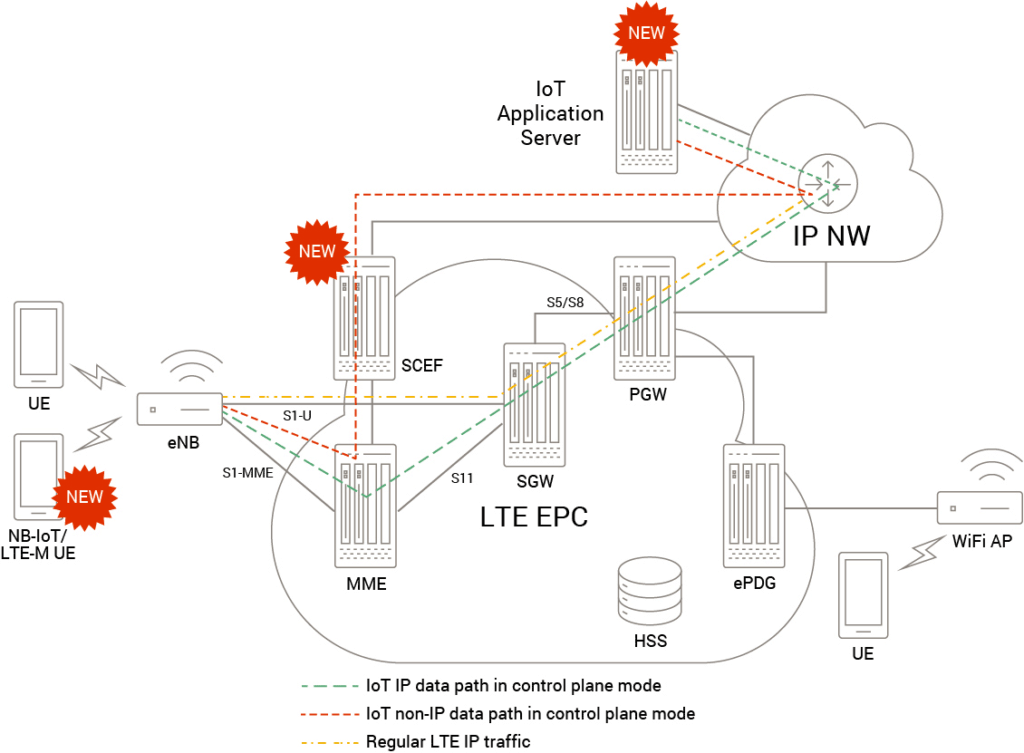 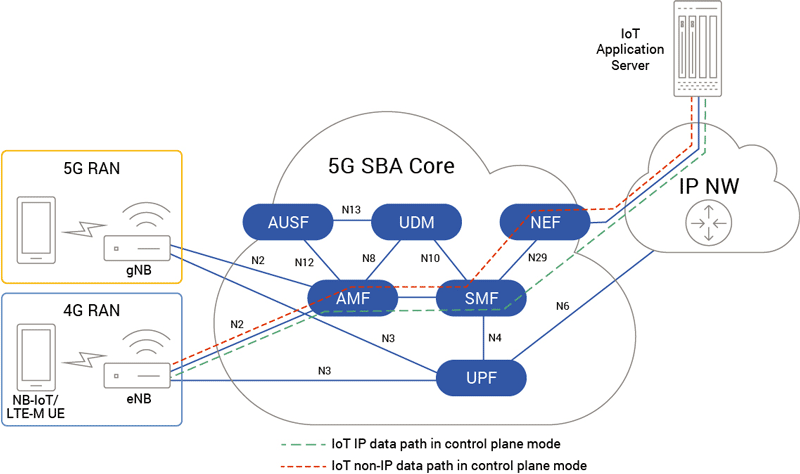 In summary, currently deployed LTE-M and NB-IoT devices will connect to the 5G SBA core in non-standalone mode, as the 5G SBA core gets deployed. Most of the cellular IoT deployment today is with the 4G network, providing device density of about 60K devices for every square kilometer. Massive IoT deployment requirements in 5G call for device density to be scaled to a minimum of one million devices for every square kilometer. 3GPP is working on enhancements to 5G technical specifications to get to this density in Release 16 (expected to be completed by June 2020) and Release 17 (expected to be completed by end of 2021 or early 2022).

Ravi Raj Bhat is global field sales CTO and shared services SVP with A10 Networks. He is responsible for driving the global technical community among sales, engineering and customers. Bhat brings over 25 years of experience in the technology industry, including a variety of senior roles leading globally-dispersed engineering teams across Asia Pacific, North America and Europe. Read More 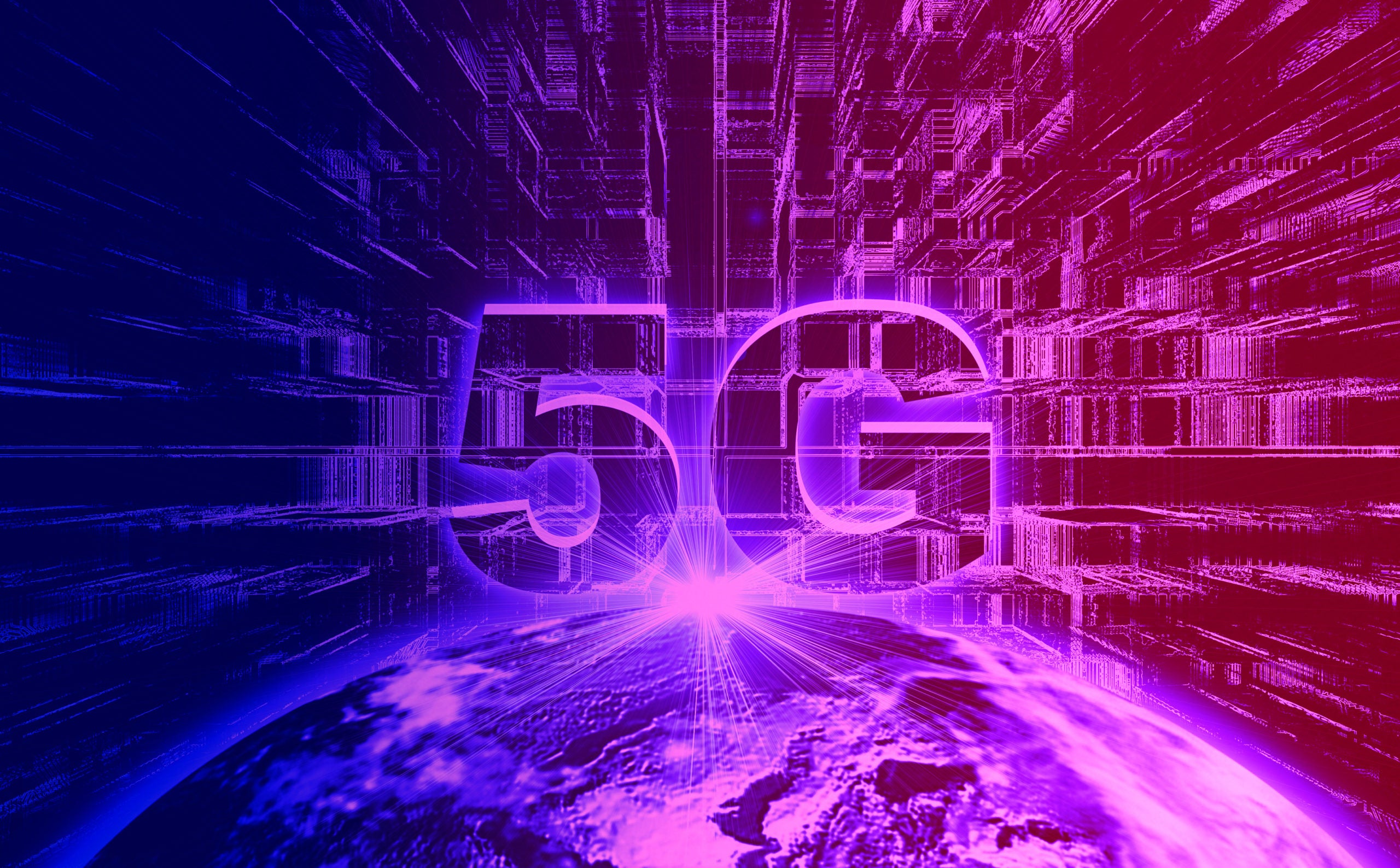