How to Protect Application Traffic in Hybrid Environments 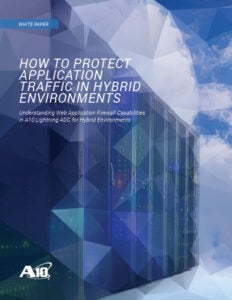 The goal of this paper is for you to understand Web Application Firewall (WAF) capabilities in A10’s Lightning Application Delivery Controller (ADC) for hybrid cloud environments. You will learn how to do the following: 1) block application profiling and sensitve data exposure; 2) protect against malware; 3) block traffic from bad BOTs and much more.

Attacks against applications have become increasingly common and the trend is on an upward swing. Reports suggest that application layer attacks on web applications will grow 17.34 percent from 2014 to 2019. Securing applications and traffic from various threats and attacks is imperative.