A10 Blog / Cyber Security / Security Predictions for 2015: #5 – POS Systems Will Continue to Be under Fire, but Smart Cards Will Come to the Rescue

Security Predictions for 2015: #5 – POS Systems Will Continue to Be under Fire, but Smart Cards Will Come to the Rescue 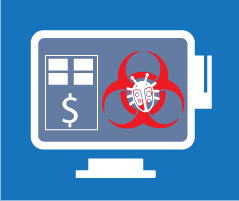 Retail breaches overshadowed virtually every other attack vector in late 2013 and 2014. A continuous parade of breach disclosures hit headlines and affected many of the world’s most well-known retail brands. The culprit behind these breaches: malware infections on point-of-sale (POS) devices. Using a variety of techniques, including brute force and compromising management or software update tools, hackers are able to install malware on POS systems. The malware scrapes credit card numbers and CVVs from system memory. The most advanced malware strains can actually capture data from inter-process communications, quickly zeroing in on payment card data.

While we predict that these attacks will continue, the migration to chip-and-pin smartcards towards the end of 2015 will make it harder for hackers to monetize the data stolen from POS systems. They won’t be able to use fake magnetic cards and will primarily be relegated to online payment fraud.

What should organizations do to prevent POS-based breaches? They can protect POS systems from malware using white-listing, code-signing and behavioral techniques, harden systems against compromise by controlling who and what can access POS terminals, and monitor for infiltrations with advanced threat prevention platforms. And since malware can communicate to command and control servers over SSL and over normally harmless protocols like DNS, organizations should inspect all traffic, including encrypted traffic.

The Importance of Staying Left of the Exploit [Video]

The Hidden Cost of Auto-Scaling E-Commerce in the Cloud

Modernize for Tomorrow with A10 at AFCEA West 2017